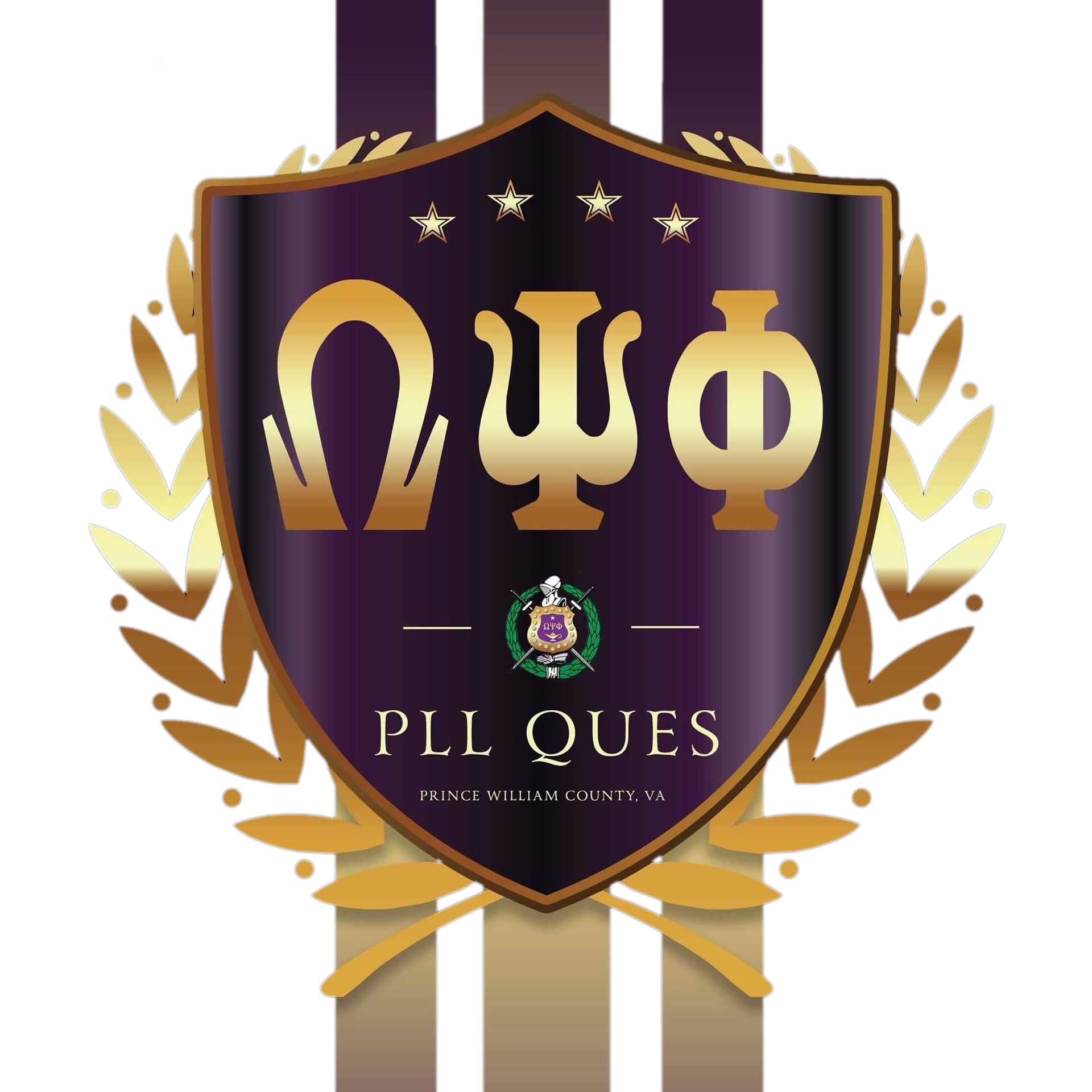 The idea of a chapter of Omega Psi Phi fraternity to serve Prince William County originated with former Third District Representative Brother Curtis Baylor. During his administration, Brother Baylor began to discuss the idea of starting a chapter in Prince William County because of the significant number of brothers living there who were not willing to make the trip to attend meetings in Fairfax County. Because of this, many of these Brothers were not active in the Fraternity. These brothers believed there was a need for a fraternal anchor closer to home, in the community where they lived, worked and served. After the 2002 Conclave, Brother Baylor began a serious effort to make this chapter a reality and promoted the idea aggressively. In the latter part of 2003, Brother Baylor appointed Brother Alexander King, who was then financial with Psi Alpha Alpha Chapter, to spearhead the founding of this new chapter. Brother King invited several other brothers who lived in the area to join in this endeavor. 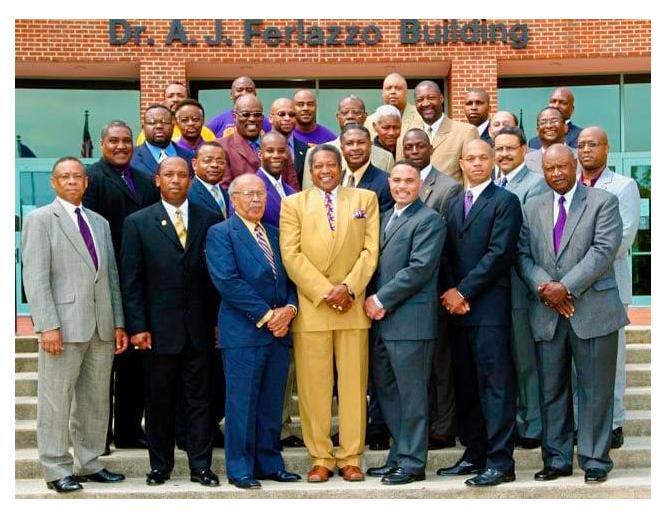 Brother King began by hosting and chairing several meetings at his home in Woodbridge, Virginia. The first meeting was on December 7, 2003. In attendance were Brothers Crispin Abad, Gene Bryson, Phillip Ferguson, Steven Holmes, Jordon Pope, Carl Ross and Andre Smith. Brother Curtis Baylor attended this meeting to kick off the effort. He informed the brothers in attendance of his vision and the benefits of having a chapter to service the community needs of Prince William County. He strongly encouraged the starting of a new chapter. The meeting concluded with a commitment to seriously pursue organizing a chapter. Each attendee agreed to seek other brothers in Prince William County and bring them to the next scheduled meeting.

Brother King hosted and chaired the next meeting in his home on December 16, 2003. Additional interested brothers from the Prince William County area, both active and inactive attended. In attendance were Brothers Crispin Abad, Gene Bryson, Phillip Ferguson, Anthony Fields, Darryl Hairston, Steven Holmes, Herbert Mitchell, Jordon Pope, Carl Ross, Andre Smith, Arthur A. Sobers, Jr. and Algie Walker, Jr. It was apparent there were enough interested brothers to begin work on filing for a charter. Chartering fees were determined and each brother agreed to spread the word that a new chapter would be organized to serve Prince William County. They also agreed that the chartering fees would be paid at the next meeting to get the process underway.

Brother Jordon Pope hosted the next meeting at his home on January 5, 2004. Brother Alexander King chaired the meeting. Twenty-eight (28) brothers were in attendance and signed the charter. Brother Gene Bryson served as interim treasurer and collected and accounted for all chartering fees. One (1) additional charter member was added the next day resulting in a total of Twenty-nine (29) charter brothers. The following twenty-nine (29) brothers are listed as charter members:

Brother Jordon Pope acted as interim secretary by completing the application packet and mailing all documentation and fees to the International Headquarters on January 9, 2004 .

On January 24, 2004, the Supreme Council officially approved the charter and assigned the name as Pi Lambda Lambda Chapter of Prince William County, Virginia. Thus, Pi Lambda Lambda Chapter was officially born as Chapter #919 of the Omega Psi Phi Fraternity, Incorporated. This was also a significant reclamation event since half the charter brothers were previously inactive. Brother Baylor personally conveyed the good news and encouraged the brothers to start to plan for the Chapter installation. The days that followed were days and nights of jubilee in the hearts and minds of the chartering brothers. Word immediately spread throughout Northern Virginia about the founding of a new chapter of the Omega Psi Phi Fraternity named Pi Lambda Lambda.

On Saturday, January 31, 2004, Pi Lambda Lambda conducted the chapter inaugural meeting at the home of Brother Alexander King who initially chaired the meeting. The first order of business was election of chapter officers. The task of assuming the helm and charting the course fell on the broad shoulders of Brother Bernard Oliphant who was elected as the chapter’s first Basileus. The following brothers were elected to assist him: Byron Cherry – Vice Basileus; Cozy Bailey – Keeper of Records and Seal; Jordon Pope – Keeper of Finance; Carl Ross – Parliamentarian; Willie Camp – Chaplain; and H.L. Barner – Keeper of Peace. Following the elections, Third District Representative, Brother Curtis Baylor, recognized Brother Alexander King as the founder of Pi Lambda Lambda and thanked him for a job well done. Brother King acknowledged and thanked Brother Baylor for his support in making the chapter a reality. In a moving ceremony, Brother Baylor installed the newly elected chapter officers and presented the chapter with the charter. Brother Robert Lewis, then the Third District First Vice District Representative, followed with words of congratulations and expectations. The meeting ended with fellowship and libations courtesy of Brother King.

Under the leadership of Brother Oliphant, the chapter began to work diligently on getting organized during the first year. Brother Oliphant placed emphasis on prayer, getting to know each other as well as fraternal education and training. As Vice Basileus, Brother Cherry appointed committee chairs and the work began in earnest. Brothers Steven Smith and Crispin Abad were appointed Assistant Keeper of Records and Seal and Assistant Keeper of Finance respectively. The By-Laws committee, chaired by Brother George Parker, developed a comprehensive set of By-Laws that were presented to the chapter and approved. Brother Parker also served as the chapter representative to the Northern Virginia Pan Hellenic Council. The Budget committee, chaired by Brother Darryl Hairston, crafted and obtained chapter approval for a budget to get the chapter through the first year. Brother Hairston also instituted a comprehensive voucher system along with a travel policy to put in place appropriate fiscal management controls. The Strategic Planning committee chaired by Brother Arthur A. Sobers, Jr. developed a five-year strategic plan for the chapter. Brother Steven Smith instituted a unique and well received practice of recognizing the birthdays and anniversaries of Brothers and Spouses by sending cards from the chapter. The chapter also initiated informal social gatherings for Brothers and their Families.

Initially, chapter meetings were held at the homes of brothers. In November, 2004, the chapter began having meetings at the Dr. A. J. Ferlazzo Building in Prince William County, to better accommodate the growing chapter and stabilize meeting times and location. This was accomplished through the efforts of Brother Steven Smith, resulting in establishing a regular working relationship with the community the chapter supports. Monthly meetings were established as every third Saturday of the month at 10:00 A.M.

One of the highlights of the first year was the Retreat conducted in Front Royal, Virginia October 15-17, 2004. This event was inspired by Brother Oliphant and spearheaded by Brother Gene Bryson. During this event, the chapter conducted Team Building and Strategic Planning for the upcoming 2005 Calendar Year. The chapter meeting for the month of October, to include chapter elections, was also conducted during the retreat. The following new officers were elected: Frank McClary – Vice Basileus; Steven Smith – Keeper of Records and Seal; Albert Lamar – Assistant Keeper of Records and Seal; Crispin Abad – Assistant Keeper of Finance (previously appointed), and James Noel – Chapter Editor. All other incumbents were reelected to a second term of office. Additionally, the chapter selected Brother Alexander King as our first Omega Man of the Year, Brother (Dr.) Luke Torian as our first Citizen of the Year and Brother (LTC) Frank McClary as our first Colonel Charles Young Military Leadership Award recipient, all to be honored at the Achievement Week program. Chapter committee chairs and committees were energized and focused on mandated programs for 2005. The chapter later voted to make the retreat an annual event and to name it in honor of Brother Gene Bryson to recognize his perseverance in making the first retreat a resounding success.

On December 1, 2004, the chapter ended the first year with a Christmas Party for chapter brothers and their guests. The chapter Social Committee, chaired by Brother Trevor Hamilton, hosted a lavish spread at the Montclair Golf Club. All who attended feasted on great food and enjoyed a great evening of music and dancing.

The chapter kicked off the second year with a Que Year Reception conducted on January 22, 2005. This event served as 1) the chapter’s official introduction to the Prince William County community, 2) a reclamation activity, and 3) a celebration of the chapter’s first anniversary. This event, Co-chaired by Brothers Trevor Hamilton and Arthur A. Sobers, Jr., was a grand success enjoyed by more than fifty (50) brothers and guests. Brother Oliphant took this opportunity to introduce our chapter and programs to members of the Prince William County community. Additionally, charter brothers in attendance and other working brothers in the chapter were recognized by the Basileus with unique chapter service medallions.

On June 19, 2005, the chapter also enjoyed an exciting “Juneteenth Celebration” at the home of Brother George Hampton. This event, hosted by Brother Hampton, was a festive and joyous cookout for the families and guests of the chapter. These were the first official social events for the chapter.

To know and appreciate the history of the Third District, it is helpful to understand how and why districts in general were originally formed, their evolving impact on the organization of the Fraternity, and their related and evolving function.

From the founding of Omega on November 17, 1911, throughout its first decade, Districts and District Representatives as we know them today did not exist. The Grand Basileus was solely responsible for administering all facets of the Fraternity—a job that became increasingly more difficult as the Fraternity grew.

In response to Omega’s increasingly rapid growth, in 1922, the Eleventh Annual Grand Conclave, which met in Philadelphia, PA, authorized the creation of the Office of Vice Grand Basileus. At the time, the Vice Grand Basileus’ primary role was to assist the Grand Basileus with managing the Fraternity’s expansion. John W. Love was the first to fill the new position. Love immediately focused his efforts on working with existing chapters to increase membership while chartering new chapters that would expand Omega’s impact and reach.